Just a day after I got caught out without ear plugs, I exposed myself to another migraine trigger common in public spaces — fluorescent lights. I am never without TheraSpecs, but I occasionally take them off for a few seconds when I need confirm an exact color match (like choosing embroidery floss). That’s what I intended to do, but got so absorbed in what I was doing that I left them off for 10 minutes.

Lo and behold, a migraine began with a spate of icky symptoms — dizziness, disorientation, nausea, wooziness and irritability. I was unhappy about the migraine, but was pleased by the illustration of just how effective indoor TheraSpecs are.

Because I wear TheraSpecs all the time, it has been so long since fluorescent lights have triggered a migraine for me that I forgot just how quickly a severe migraine follows exposure. The difference really is astonishing. Of course I knew the improvement was dramatic — Hart and I wouldn’t have started TheraSpecs if it weren’t — but I hadn’t experienced it in so long that I’d forgotten just how big the change is.

So many triggers are impossible to avoid that it’s such a relief to find a way to ward off any of them. With ear plugs and TheraSpecs, I have two of the three major triggers covered… if only I could find something to get rid of smells in stores.

After being featured on the national radio show Dream Big America this morning, TheraSpecs is in the running for a Kauffman Foundation grant that will help us get TheraSpecs to more people who need them. We need your vote today! To vote, text DBA to (612) 223-7326 or vote online. You can hear Hart’s short radio segment, read some Q&A about the business, and vote for TheraSpecs on the Dream Big America website.

Voting is only open until 2 p.m. Eastern tomorrow, so please vote now and spread the word! Thank you. 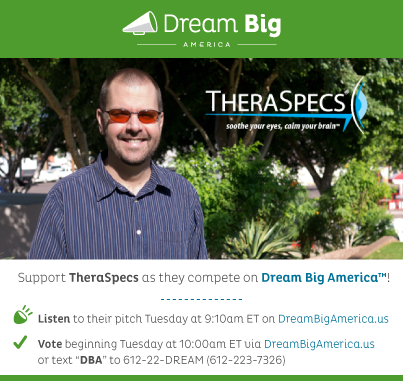 TheraSpecs is one of two start-ups selected to represent Arizona at the national Tech Cocktail Celebrate, now we need your votes to present on stage at the event. It takes about 5 seconds — just click here, scroll down to the green buttons, and click TheraSpecs. No registration required. Thanks!

I’m so excited to finally be able to announce that TheraSpecs Pilot, an aviator frame with a curved lens for maximum light protection, is now available. I’ve been wearing a prototype for months and love them so much that I’ve been dying to tell you about them!

Although Pilot looks like a classic aviator from the front, the lenses are curved for a wrap effect, so they block light really well. The golden metal alloy frame compliments the rosy hue of the TheraSpecs tint, plus it is very lightweight. Add in soft silicone nose pads and spring hinges and this eyewear is super comfortable in addition to looking great. Although aviators aren’t usually my style, I like Pilot so much that I wear them almost exclusively as my indoor frame.

Even better, we’re offering a 30% introductory discount off the regular price of $99 for indoors and $129 for outdoor polarized lenses. Order your Pilots this month and you’ll automatically receive the discount — that’s $69.30 for a pair of indoors and $90.30 for outdoors. 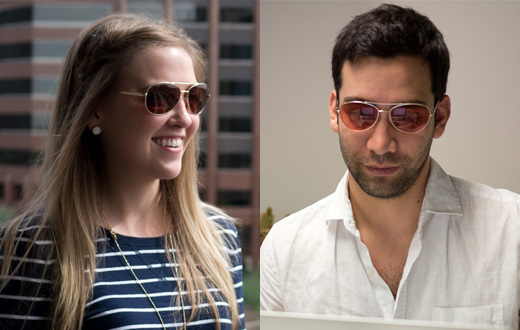 TheraSpecs Classic, our newest, lightest, and most affordable frame style is now available! As you can see, this timeless style looks great on both women and men, whether worn indoors or out. Plus, they weigh in at only 22 grams. Classics are only $99 for indoor lenses and $129 for polarized outdoors lenses. Classic frames can also be ordered with prescription lenses for a slightly higher cost. Email us for details on Rx orders or on sending in frames for totally custom TheraSpecs at custom@theraspecs.com. 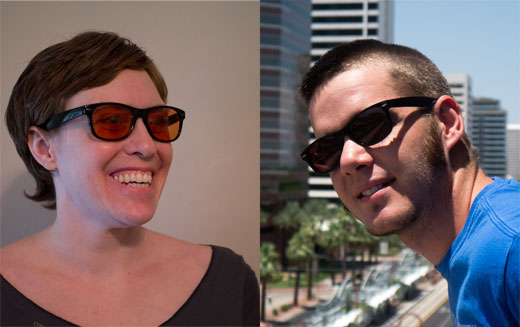 Wondering why I’m advertising migraine glasses? TheraSpecs is the company my husband, Hart, and I started after my neurologist told me that wearing sunglasses indoors was increasing my photophobia. He told me about a special tint that reduces light sensitivity, but I had trouble ordering glasses with that tint. Hart used his product management background to source frames that fit all my requirements and I loved them so much that we decided to start a company to make them readily available to anyone who is sensitive to light. You can read about our journey to start TheraSpecs in Big News for Relief From Photophobia & Sensitivity to Fluorescent Lighting (CFLs) and learn more about TheraSpecs on our website and by following us on Facebook and Twitter.