Being in Seattle this summer has brought emotional turmoil. I love it here and am grateful to get to spend time away from the Phoenix storms. But, I love it here and am angry that migraine is the reason I don’t live here. The grief from not being able to live in the city that feels like my home is immense.

In My Favorite City, Another Migraine Loss, published today on Migraine.com, I wrote about my immense grief and the anger it triggered after I visited my old neighborhood:

“The tears flowed, not out of nostalgia for the times I had here, but grief for how much I love this place I do not live and that migraine is the reason I do not live here. … I’m also angry that migraine has made this choice, and so many others, for me. I didn’t invite migraine into my life, and yet it weighs in on every single decision I make.”

I wrote that post a few weeks ago and my emotions have settled down a bit. The grief is no longer acute and I don’t feel quite as connected to the city as I once did. Perhaps that’s because Seattle has changed a lot in the last four years; perhaps because Hart just visited for a week and I realized that, more than any particular location, he is my home. Or maybe it’s just the ebb and flow of grief.

Home is where I want to be when I have a migraine. Being nearly housebound since I moved to Boston in August, you’d think I’d be all set. Except that “home” is far more metaphorical than literal. In Seattle, my home was on the couch in front of the fire. Even if my apartment here had a fireplace, it wouldn’t be the same. Home is an emotional place, an emotional state. One that is found by feeling it. One I haven’t found since moving to Boston, not in my apartment or in the city.

Driving from the airport into Seattle the first time Hart and I visited, I knew I’d found my home. In fact, when I was 13 and first visited the Pacific Northwest, it felt like home even though I wasn’t aware of what that meant. Now I’m 3,000 miles away and I feel the distance acutely. I know Boston is a great city and there’s a ton to see and do in the Northeast. Enough friends of friends are here that I’m confident we can build a great social circle. The move isn’t intended to be permanent. All this logic doesn’t erase the ache for Seattle and the forests of the northwest.

Hart and I went back at Thanksgiving. The first morning, we went mushroom hunting. My heart sang as we drove through the city, seeing the water and evergreens. The ferns, the moss and the drizzle in the forest felt so good that I turned my face to the sky to soak it in. Then a severe migraine hit on the drive back to our friends’ place. The subsequent migraines were so bad that, except for a massage appointment, I didn’t leave their house until we went to the airport, 10 days after our intended departure. I have to wonder if not wanting to leave my beloved city was the primary migraine trigger.

Over the last month, the migraines have improved steadily. I even went to Hart’s work’s holiday party Tuesday night and had a great, low-pain time. I also met a lot of new people, all of whom were curious about Seattle. Talking about my city was soothing yet heartrending. The next day, I stumbled upon The Place I Love: Songs About Longing, written by someone from Portland who recently moved to New York. Listening to the songs she shared was another bittersweet comfort. 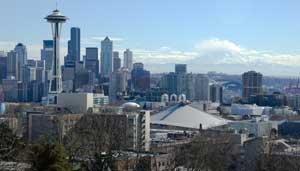 Seattle’s lakes and trees and cranes and Space Needle fill my soul. Even when I didn’t leave the house, the glimpses out the windows cheered me. I didn’t realize how much the city carried me as I struggled with an ever-worsening chronic illness. Moving to Boston was the right choice for Hart and me and I want to make it home while we’re here. But how do I find my place in a city that doesn’t nurture me?

I’ve been asked about Seattle headache specialists and neurologists more times than I can count in the last month. My experience is quite limited, but the online support group and forum has a thread with recommendations for Seattle headache doctors. If you have any to add, please do! You can also check What Do You Think of Your Doctor, an earlier post with lots of good suggestions, some in Seattle, some elsewhere.

Here’s what I know:

I’ve seen Sylvia Lucas at UW and Sheena Aurora at Swedish. They are both kind and caring. We all click with different people, of course, but I found Dr. Lucas to be more patient-oriented and Dr. Aurora to be more research-oriented. Both have at least three-month long waiting lists. It took six months to get into my first appointment with Dr. Lucas and follow-ups are usually scheduled two months out. Dr. Aurora is more like three months for an initial appointment.

A friend sees Patrick Hogan, an osteopathic neurologist, in Tacoma. His number is (253) 284-4488. He requires a doctor’s referral regardless of your insurance and your family/general physician will have to contact his office to get you in.

For other doctors in the Seattle area — or anywhere else in the US, check the National Headache Foundation’s physician finder or the American Headache Society’s health care provider search.

8/14/14: Many readers have lamented Dr. Elena Robinson‘s move to Vancouver. She’s back in Seattle and is in practice with the University of Washington.

If you live in Seattle or its suburbs, have migraine and/or chronic daily headache, and would like to help me with a story for the writing class I’m taking, let me know!

I don’t have details yet, but my aim is to tell the story of another headache sufferer. I want to get to know you, how you live and the place that headache has in your life. It will involve some talking (translated: me asking you questions) and some general hanging out time (translated: me following you around while you go about your life).

If you’re interested in knowing more or would just like to get together sometime and talk about coping with headache disorders, please e-mail me. We’ll talk about particulars and you can tell me if you want to go through with it or not. There’s no pressure.

I know my story inside and out and, while our experiences are similar, they are also very different. Each one of you has a story worth telling. This is my first step in learning how to help you tell those stories.