Join me in a fundraiser for Headache on the Hill scholarships for people who want to attend, but can’t cover the travel costs. This is a virtual event that you can walk or run for or just set aside time to do something relaxing. You can participate any day you’d like between June 28 and July 7.

I attended my first Headache on the Hill in February and it’s was an incredible experience. We visited the offices of senators and representatives to ask for an amendment to a bill in Congress. While this year’s efforts were derailed by the coronavirus, meeting with staffers to talk about migraine was itself an act of awareness-raising. I felt like I moved the needle toward better funding for migraine treatment. If you’re able to attend, I highly recommend it. Even if you’re not able to attend, please consider supporting the event virtually.

Here are the details: Headache on the Hill Walk, Run or Just Relax Event

I never used to think of stress as a migraine trigger for me, but I’ve discovered in the last few years that my migraine frequency does increase in times of extreme stress. Unsurprisingly, right now qualifies as highly stressful and migraine kicked my butt for weeks this spring.

I tried all my usual tactics—I made sure my sleep and diet were in good shape, stopped reading the news, made exercise a priority, and committed to lots of relaxation. Nothing made a dent in my attacks. They got so bad that I had to take a leave of absence from TheraSpecs and stopped my advocacy work. Still no change.

After three weeks of frustration, I had an epiphany—maybe the stress of the increased migraine attacks was itself triggering more migraine attacks. While I had pulled out all the self-care stops, I had continued to obsess over my triggers and be frustrated every time an attack landed me on the couch for the day.

So all I had to do was stop being stressed! Aiming for that goal is usually a recipe for increasing my stress levels, but this time I managed to let go. I decided to drop all the worry and, for some reason, it actually worked. By the next day, I started to feel better. Within two days, I could definitively say that my attacks we less frequent and less severe, plus I felt better between attacks than I had in months.

I asked psychologist Dawn Buse, PhD, for her thoughts on the stress of migraine as a migraine trigger. She pointed out that it’s impossible to tease out which came first, the chicken or the egg, and explained more about the relationship between stress and migraine. She said:

“The relationship between stress and migraine has many different forms which can change from person to person, and over time and life phases for an individual. Stressful events or periods can contribute to triggering an attack. This can occur during a period of high stress or after the stress level has reduced, which is called the “let-down” effect. Long periods of stress (such as a personally difficult time or the global pandemic) can be associated with increased frequency of attacks. And some stressors such as childhood maltreatment are associated with the onset of migraine disease. Conversely, stress is also a consequence of living with migraine. Migraine can have significant negative impact on all important aspects of life and negatively impact relationships, careers, finances, academics, family, friendships and fun, just to name a few areas-—which can be very stressful.”

Dr. Buse also gave some information on managing stress, which I’ll include in an upcoming Migraine.com article on this same topic. Most notably, she shared a quote from Jon Kabat-Zinn that spoke to my recent experience: “You can’t stop the waves, but you can learn to surf.” My attempt to stop the waves was not only ineffective, it made me feel like I was drowning. When I attempted to surf, my migraine attacks improved within a day.

I’ve been trying to surf for a couple weeks now and am doing well enough that I’ve spent this week on advocacy work and will head back to (remote work at) TheraSpecs next week. I’m nervous, but excited to get back to a life beyond my own health.

I’ve been thinking of you all and hope you’re doing as well as possible. Life is so weird right now.

Please join me this Friday, Saturday, and Sunday, April 17-19, for the virtual RetreatMigraine experience—a series of information sessions on migraine that will stream on Facebook Live on the Coalition for Headache and Migraine Patient’s Facebook page. Here’s a schedule of the free events so you can watch live. I’ll be on a panel on Friday and will be leading a session on self-care on Saturday that I’m really excited about. I’d love for you to join me! 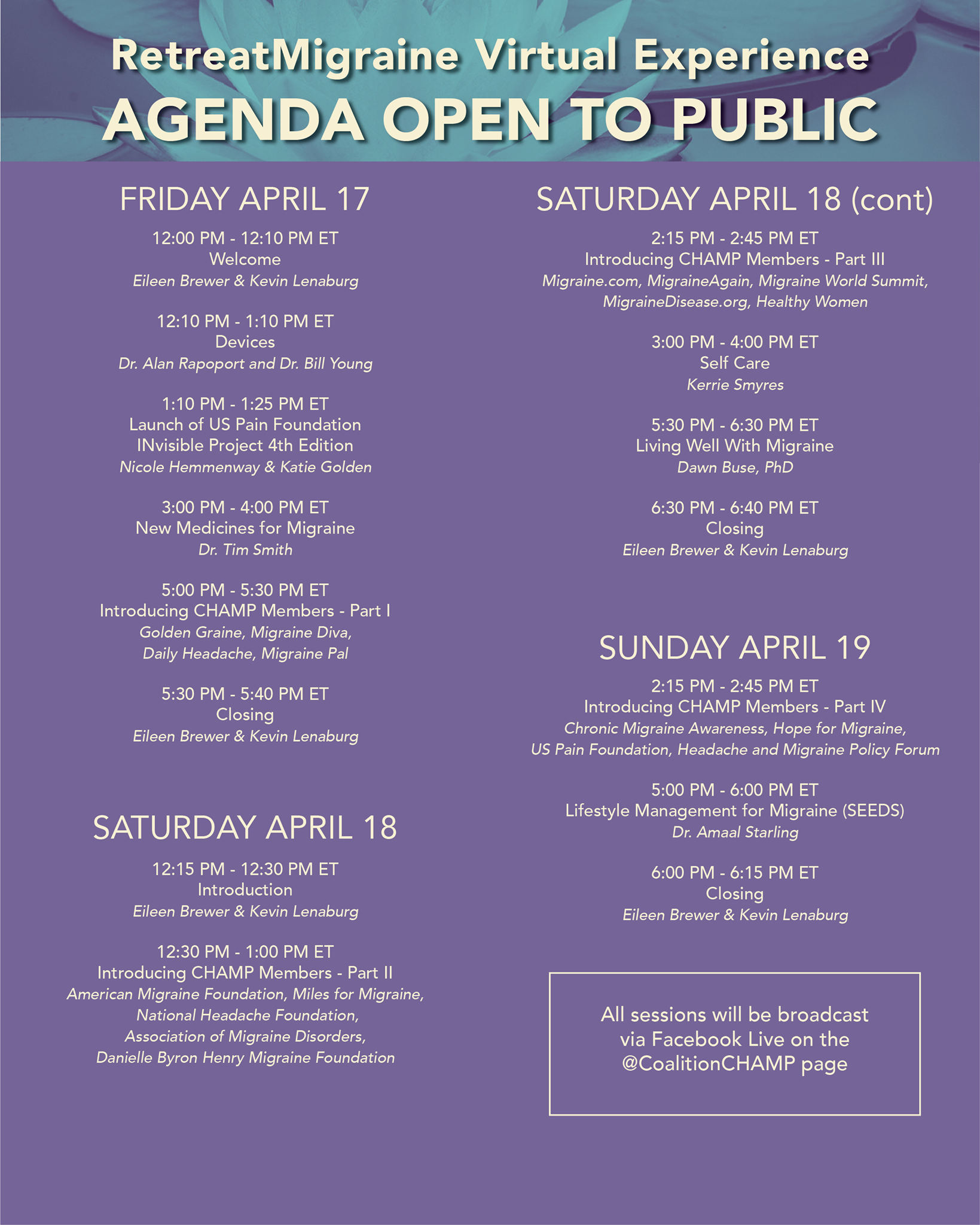 If you’re not familiar, RetreatMigraine is an annual in-person retreat sponsored by CHAMP. The second annual retreat was scheduled for this weekend in California. When it had to be rescheduled, CHAMP decided to make some of the sessions virtual and open them up to anyone who was able to attend. It’s a great lineup of knowledgeable speakers, so I hope you’re able to watch some of the events.

Want to learn more about migraine and headache disorders while you’re social distancing? The Migraine World Summit starts tomorrow, Wednesday, March 18, with online video interviews with 32 experts, including headache specialists and patient advocates. They will share new treatments, research, and strategies to improve the lives of people with migraine and other headache disorders. The event is virtual and the daily videos are free, so you don’t have to leave home or pay for a thing! Click here to register now for your FREE access.

Join more than 100,000 new and returning attendees and tune in to 32 NEW interviews to find the answers you need to help better manage migraine and chronic headache. Questions answered include:

Register now for complimentary access. Once again, here’s the link to register for the Migraine World Summit.

(Note: If you decide to pay for access to the videos beyond the day they are published, I will receive a small portion as a referral fee. That’s not why I’m sharing the link—the Migraine World Summit has great information that everyone should have access to—but I wanted to be fully transparent.)

The headache disease community needs your help! To gather information to help improve patient access to treatments, advance research, and decrease stigma of headache diseases, the Coalition for Headache and Migraine Patients (CHAMP) is conducting a survey. I’m a CHAMP member and can tell you that the coalition is doing great work for people with headache diseases. We can be even more effective if we hear from more patients about their experiences.

In order to do this important work, we need to hear from more voices. This is where we’re asking for your help. You can:

The survey is hugely important and takes about 15 minutes to complete thoughtfully. I promise your time will be well spent. At the end of the survey, you have the option to enter to win a $25 Amazon gift card.