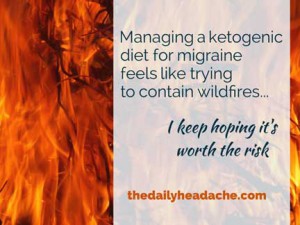 At Christmas-time, Hart and I made plans to see friends from Montana who were visiting family in a Phoenix suburb. I offered to make the 30-minute drive to where they were staying so their kids could sleep while we talked. They got a babysitter and came to our house instead. I thanked them, saying that since I didn’t have to go anywhere, I was able to take a shower. They laughed, assuming I was joking. These are close friends who know I’m quite ill and their laughter showed me that no one other than Hart really knows the affect migraine has on my day-to-day life.

This has been a typical bad week. The migraines haven’t been horrendously painful, but the conglomeration of symptoms, particularly fatigue and nausea, has really drug me down. (I should interject to say that by “not horrendously painful” I mean that the pain hasn’t exceeded a level 7 on a scale of 1 to 10 — I forget that my perception of pain is skewed.) It was the perfect opportunity to catalog my activities to show what my days are like. I’m now trying to figure out how to share them with you in a way that isn’t tragically boring.

Tuesday
I stayed in bed reading news on my phone for two hours after I awoke. I usually feel worse after I get out of bed, so I like to linger if I feel OK so I can savor it. I used to plan my days while still in bed, but I stopped after noticing that the plans usually collapse because I usually feel so much worse within 15 minutes of getting up.I felt well enough when I got up to shower, which has been unusual the last eight weeks.

Showering often depletes my energy and Tuesday was no exception. It took two hours of playing Words With Friends and mucking about on my phone to gather enough strength to go out for a few groceries.

When I got home, I was grumpy, weak and very spacy, all indications of an impending migraine. I took a Maxalt melt and a Zofran and watched an episode of Dr. Who while the drugs went to work. Afterward, I was able to clean up some veggies and roast them for roasted vegetable stock. That was it for my energy, though, and I was in bed by 9 p.m.

Wednesday
I had an 11 a.m. appointment, so I set the alarm for 9:30, knowing how slow mornings can be. It took an hour for me to get up, dress (in the previous day’s clothes) and put in my contacts, during which time I had Hart cancel my appointment because the migraine was too bad. I had to sit down several times while getting dressed, then crawled to the door so I could grip the frame to pull myself up. I walked the 10 steps to the bathroom and sat on the floor to rest before putting in my contacts.

I spent most of the day watching Dr. Who, though I got up and walked around after every episode to see if I felt well enough to do something. By 5:30 p.m. I was able to pile the roasted veggies in a pot and fill it with water to make the stock, but I was trembling so violently that I had to lean on the counter to hold myself up. Severe trembling is another sign that I’m in the early stages of a migraine, so I took an Amerge, pushed through what I needed to do in the kitchen and watched another Dr. Who. It halted the migraine pain, but I never did regain enough energy to do anything else.

Also, I was too cognitively impaired all day to be able to play Words With Friends, which has become a source of pleasure and connection for me.

Thursday
I felt good enough that I thought I’d be able to take a shower and not have to wait for a recovery period. Nope, the shower wore me out and another migraine hit. More Dr. Who while I waited for the Maxalt and Zofran to work. They did, though not in time for me to make it to my dental appointment.

I napped and by 3 p.m. was in good enough shape to drive myself to Whole Foods. Not only that, I started chicken stock on the stove while I sent some emails that I’d been too sick to deal with, and heated up dinner to eat with Hart. We ate, then I cooked some more and cleaned the kitchen. And, for the last hour, I’ve been writing this post. This qualifies as a good day.

I noticed when I got into bed that my entire head, including the roof of my mouth, was pounding. Four hours and two Midrin later, I was finally able to go to sleep.

I am not a lazy person. Chronic migraine is not an excuse for me to be a couch potato. I am forever asking my body to allow me do more than it wants to do and take advantage of nearly every decent moment I get. Knowing how little I accomplish even though I try so hard is disheartening. Acknowledging how long it takes to get out of bed or the devastation a shower unsettles me.

Simultaneously, I am proud that I make the most of my limited life. The smallest achievements are exciting and I enjoy every task, even cleaning the toilet, because I’m thrilled to be able to do them. I never know how long a good spell will last, so I don’t take any of it for granted. Carpe diem is my motto because it has to be. If I didn’t seize the day, I’d likely wither away.

A friend recently told me that my day-to-day life seems pretty awful. Compared with a normal life — and with the grand, world-changing life I expected to live — it is. But these are the circumstance that I have to work with and I’m growing accustomed to the limitations. I get angry and frustrated at times, but I also revel in the joy of a perfectly crafted chicken broth, indulge in the wonderful fiction of audiobooks and television series, and appreciate when I’m able to write something that helps others with chronic daily headache or migraine. Considering how small my life appears on the outside, I feel like I live pretty large.