Most pregnant women want to avoid all medications during pregnancy, but that’s not always practical with a health issue like migraine. Doing so can lead to other problems, like severe weight loss, that could be even more dangerous than taking certain medications. These must-read articles answer questions about migraine during pregnancy and breastfeeding, which medications are safe, weighing your migraine management options and more.

Migraine and Pregnancy
A brief overview migraine and pregnancy, this article from Beth Israel Deaconess Medical Center in Boston starts with advice for women considering becoming pregnant and answers common questions about migraine during pregnancy and while breastfeeding.

You Are Pregnant (or Planning to Have a Baby)
Is your migraine frequency or severity likely to change during pregnancy? Can having migraine attacks while pregnant harm your baby? The National Headache Foundation shares statistics and answers questions.

What To Expect With Pregnancy and Delivery
This excerpt from The Woman’s Migraine Toolkit provides detailed and easy-to-understand explanation how hormones during pregnancy and after delivery can impact migraine. (Diana Lee of Somebody Heal Me, who is expecting a baby in July, recommends this book.)

Expert Answer: How can I manage my migraines during pregnancy?
A headache specialist talks about the importance of creating a migraine treatment plan for use while pregnant, which medications are safe to use during pregnancy and what alternative treatments a pregnant woman can consider trying.

A Migraine Mama’s Advice on Balancing Medication Usage During Pregnancy and Breastfeeding
A chronic migraineur reconsidered her resolve to avoid all migraine medications during pregnancy after her migraines spiraled out of control and she lost 15 pounds before her first OB appointment. She describes the emotional wrangling of finding the balance between getting the treatment she needed without endangering the pregnancy.

And remember, your particular situation may be different than those addressed in any of these articles. Work with your doctors to find the safest, most effective treatment approach for you. Having migraine attacks while pregnant isn’t harmful, but they are a physically stressful event. Your body is already stressed enough with the changes of pregnancy, so it’s extra important to take good care of yourself and treat your migraines appropriately.

Children of women who take Tylenol (acetaminophen) during pregnancy have a 37% increased risk of being diagnosed with ADHD and a 29% increased risk of needing ADHD medications over kids whose mothers didn’t take the drug while pregnant, according to a large-scale Danish study. This is a correlation, not proof of causation. The two factors occur together, but they could be entirely unrelated.

Scientifically, a single study showing a correlation should not be a cause for alarm. This is pregnancy we’re talking about, a time when women are extra cautious and extra worried about everything they ingest. As one of the study’s authors said,

“As a scientist, I never want to be alarmist and use one study [to make clinical decisions]. But as a woman, when I see something like that, I would be worried, and wouldn’t take Tylenol during pregnancy any more.”

For most women, this is a fine, if sometimes uncomfortable, option, but having a headache disorder complicates the issue. Not taking any medication during pregnancy could mean months of severe pain and symptoms like nausea and vomiting (which could also be problematic in pregnancy). Women are frequently told that acetaminophen (or occasionally opioid painkillers that include acetaminophen) is the only safe option. What if the safe option isn’t actually safe?

What’s the best choice — a horribly painful pregnancy or the possibility of impaired fetal development from taking medication? Whether you’re deciding if you should take painkillers or triptans, that’s a decision you can only make for yourself. Consider how a medication-free pregnancy would affect your life and talk to both your headache specialist and obstetrician about options. They are likely to give you conflicting opinions; you’ll either need to get them to talk to each other or choose the one you trust most on the issue.

The answer is never simple, is it?

Learn more about the study’s findings:

For National Invisible Chronic Illness Awareness Week this week, its sponsors at Rest Ministries and volunteers have created and compiled a tremendous array of resources for those of us with invisible illnesses.

Poke around the site for a bit. I bet you’ll learn something new that will help living with an invisible illness a little easier. 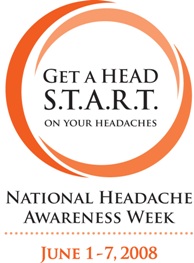 “One of our primary goals during National Headache Awareness Week is to gain recognition of headache pain as a real and legitimate condition,” said Dr. Seymour Diamond, Executive Chairman of the National Headache Foundation. “Over 45 million Americans get chronic, recurring headaches. Of this number, nearly 30 million have migraine headaches.”

Activities taking place across the country this week include headache screenings, educational seminars led by expert physicians, menstrual migraine awareness events and a 5-part podcast series focusing on women’s headache issues, a radio news release and the launch of a non-profit NHF channel on YouTube.

This year, the NHF is encouraging sufferers to “Get a Head S.T.A.R.T. on Your Headaches,” offering five easy-to-remember strategies for effective headache management and treatment:

For the first time, this year’s campaign is drawing specific attention to menstrual migraines by designating Wednesday, June 4th as National Menstrual Migraine Awareness Day. In support of Menstrual Migraine Awareness Day efforts, the NHF will also be releasing new survey data from a recent poll of its website respondents suffering from menstrual migraine.

This post is adapted from a National Headache Foundation press release. -Kerrie

Anyone with a headache disorder has a stake in depression news. Not only do headache and depression tend to go together, antidepressants are common headache preventives.

Taking an antidepressant like Prozac may increase a pregnant woman’s risk of having a baby with a birth defect, but the chances appear remote and confined to a few rare defects, researchers are reporting today.

The findings, appearing in two studies in The New England Journal of Medicine, support doctors’ assurances that antidepressants are not a major cause of serious physical problems in newborns.

But the studies did not include enough cases to adequately assess risk of many rare defects; nor did they include information on how long women were taking antidepressants or at what doses. The studies did not evaluate behavioral effects either; previous research has found that babies suffer withdrawal effects if they have been exposed to antidepressants in the womb, and that may have implications for later behavior.

The accelerated bone loss was not seen in women who took another type of antidepressant.

“That sounds very alarming, but we don’t really know if it is clinically meaningful, and we cannot definitively say that the SSRI use was the reason for the bone loss,” Diem says. “These are preliminary findings which need to be confirmed.”

Because depression itself is associated with an increased risk for bone loss in older people, a better understanding of the impact of antidepressants on bone is urgently needed, he says.

On the Horizon, Personalized Depression Drugs

Instead of the hit-or-miss approach . . . it will soon be possible for a psychiatrist to biologically personalize treatments. With a simple blood test, the doctor will be able to characterize a patient’s unique genetic profile, determining what biological type of depression the patient has and which antidepressant is likely to work best.

Suicide Patterns in Depression Unrelated to Antidepressant Use

Data on more than 130,000 new episodes of depression showed that regardless of treatment type, the number of suicide attempts was highest in the month before therapy, next highest in the first of month of therapy, and lowest thereafter, the investigators reported in the July issue of the American Journal of Psychiatry.

“Our study indicates that there’s nothing specific to antidepressant medications that would either make large populations of people with depression start trying to kill themselves-or protect them from suicidal thoughts,” said Dr. Simon.

“Instead,” he said, “we think that, on average, starting any type of treatment-medication, psychotherapy, or both-helps most people of any age have fewer symptoms of depression, including thinking about suicide and attempting it.”

Why Dutch Women Don’t Get Depressed

After scores of interviews with historians, psychologists, fashion designers, image-profilers, personal shoppers, magazine editors and ordinary Dutch women, Ellen de Bruin, a Dutch psychologist and journalist, throws down the gauntlet. [S]he argues that women in the Netherlands are a whole lot happier than their counterparts in most parts of the world.

“It has to do with personal freedom,” said de Bruin, whose work, sure enough, is titled “Dutch Women Don’t Get Depressed.” “Personal choice is key: in the Netherlands people are free to choose their life partners, their religion, their sexuality, we are free to use soft drugs here, we can pretty much say anything we like. The Netherlands is a very free country.”