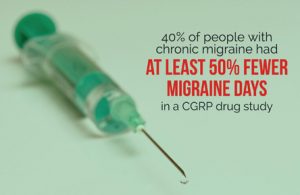 Amgen’s CGRP drug provided significant relief to participants with chronic migraine, according to new study results presented at an international conference in mid-September. The drug, called erenumab, was tested at two doses, 70 mg and 140 mg. “Both doses of erenumab were associated with significant improvements in health-related quality of life, headache impact, disability, and level of pain interference, compared to placebo,” according to Amgen’s press release announcing the study’s results.

Here’s a brief summary of the study’s details and it’s findings.

In the 12-week study, 667 participants were given monthly injections of either the drug, called erenumab, or a placebo. The breakdown was:

All participants had chronic migraine. At the start of the study, they had an average of 18 migraine days per month and 21.1 headache days each month. The following outcomes were assessed during the last four weeks of the study.

No adverse effect was reported in more than 5% of the participants. Those reported were:

This yet is another promising report on the CGRP drugs that are in development for migraine prevention. All studies so far have found a notable reduction in migraine frequency and improvement in health-related quality of life for a significant portion of participants. Minimal side effects have been reported thus far. This was a Phase 2 study. Phase 3 studies, which are underway now, will include more participants and give us more information on side effects.