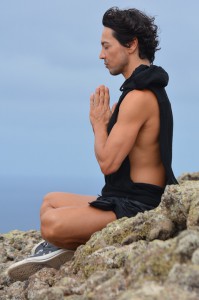 Research has fairly well established that meditation for pain relief can be a powerful tool, but HOW it helps remains a mystery. One hypothesis is that meditation employs the body’s naturally occurring opioids to control pain. This is what happens when you stub your toe—it hurts at first then it stops hurting when your body produces opioids to block the pain. This opioid theory is incorrect, according to a study published today in the Journal of Neuroscience.

These pain reduction levels are significant because they show that meditation reduced pain even in people whose opioid receptors were chemically blocked. Thus indicating that non-opioid pathways are responsible for pain relief in meditation. Further research is required to determine which pathways might be at work. It will be interesting to see if those pathways (whatever they are) have already been identified as having a role in pain relief.

Although the study included healthy participants who experienced fleeting pain, the lead researcher says the findings could be particularly helpful for people who want to avoid opioids or have built up a tolerance to them—the latter of which implies people with chronic pain. He did not condemn other treatments, but said that meditation can be used to enhance the benefits of other treatments.

Whenever I share anything about pain, I feel the need to clarify that most headache disorders are not just pain. Migraine, cluster headache, and even new daily persistent headache have symptoms that extend beyond pain. Focusing only on the pain diminishes the non-pain symptoms that can be just as, or even more, disabling than the pain. It can also lead to ineffective or even harmful treatment. I’m not worried about that with meditation, but it’s still good to remember that pain isn’t the only symptom for most headache disorders (though I doubt most of you could forget that!). In addition to it’s potential to reduce physical pain, meditation is a great tool for managing the emotional distress that comes with headache disorders. And, as Alicia pointed out in the discussion on acceptance, “the psychological aspect of having migraines can be just as devastating as the physical aspect.”