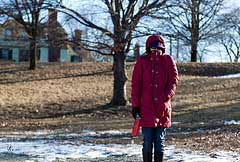 Nudging my limits instead of automatically assuming I can’t do something has already lessened migraine’s hold on me. Not only am I getting to the gym a few times a week and picking up the Kindle when I think I can read, I’ve recognized that I’m never trapped in a situation or place if a migraine strikes. It may be unpleasant to leave a restaurant mid-meal or to get a taxi when I planned to take the subway home (neither of which I’ve had to do), but I always have options.

In the last 10 days, knowing this has given me so much freedom. I’ve gone to a few restaurants, a craft fair and an opening at an art museum. Hart and I met his college lab partner, her husband and their daughter for brunch. I visited a neighborhood I’m interested in living and spent a few minutes at a park with a pond (that’s where Hart took the photo). I was usually loaded with Maxalt, Midrin and/or naproxen, but I enjoyed myself and didn’t ruin anyone else’s time.

I’m still entirely dependent on other people to get out, though. Someone is always with me when I go out. Friends and family have been staying with us most of the time since Thanksgiving. When they aren’t, Hart is by my side. He drives me to appointments, even though he has to leave work at inconvenient times to do so. He also happily explores the city with me, often knowing we won’t get out of the car. I’m so fortunate to have such an amazing husband.

Yet Miss Independent has been down too long. It is time to start exploring the world (or at least going to the grocery store) alone. That’s the next step to getting the real Kerrie back. I plan to take myself to an appointment on Wednesday. It isn’t too far away and parking is easy. I know how to get there. The doctor runs on time and the appointment will only last 20 minutes. I think know I can do this.

Do you have any suggestions for making steps toward independence after illness has kept you down?