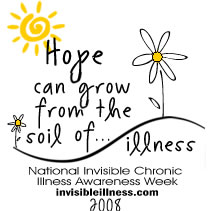 In addition to living with the symptoms of headache disorders or migraine, having an illness others can’t see can be extraordinarily frustrating. Rest Ministries is raising awareness of life with invisible illness this week during National Invisible Chronic Illness Awareness Week. Check out the following press release for information on the week.

Nearly 1 in 2 people in the USA have a chronic illness and according to U.S. Census Bureau about 96% of illnesses are invisible. So it comes as no surprise that with hundreds of thousands of people on the Internet searching for health support and information, thousands of people now post daily blogs about the emotional trials they experience while facing chronic pain on a regular basis.

National Invisible Chronic Illness Awareness Week is being held September 8-14, 2008. Part of their outreach includes over thirty days of guest bloggers as well as bloggers all over the web posting about invisible illness issues. For example, what happens when someone with an invisible illness parks in the handicapped spot, even though they are doing so legally?

Lisa Copen, who founded National Invisible Chronic Illness Awareness Week in 2002 says, “Though we live with thousands of different illnesses, we have more in common than not. For example, illness impacts our families, careers, finances and daily living, to name a few. We can all learn from one another and share during this journey.” She adds, “And frankly, people are tired of hearing, ‘But you look so good!’ and they want others to know that their illness is legitimate despite how well they seem to be holding it all together.”

Laurie Edwards is the author of a recently published book called, “Life Disrupted: Getting Real About Chronic Illness in Your Twenties and Thirties.” She has blogged about her illness since 2006 and says, “When you are a young adult, people expect you to put in long hours to establish a career, to jump into the dating world, and to build a life for yourself. But they certainly don’t expect you to be sick. There’s no such thing as ‘too young’ to be sick! That is just one of the many reasons why Invisible Illness Week is so important!”

If you would like to participate in this unique chance to blog for awareness and increase an understanding about invisible illnesses, visit www.invisibleillness.wordpress.com. You can receive updates, participate in surveys, win prizes, and learn more about the telephone workshops at the Invisible Illness Week website.