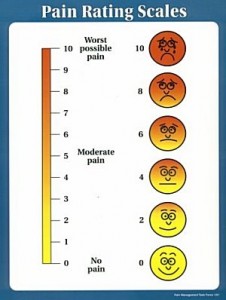 Doctors and patients sometimes see eye to eye, like with this ridiculous pain scale. It reminds me of the pain scale used in a Scrubs episode.

The scale had ten different faces on it, each one representing a different level of pain. J.D. and Elliot stood at the foot of a pain patient’s bed, trying to determine which of the faces most resembled the patient’s expression. (He was a 7.)

They never found a cause for the man’s pain; it took an advocate for the show’s doctors to believe him. In tears, his wife explained how severely his life was affected and her complete conviction that the pain was real. The show concluded with a comment that illness doesn’t have to be seen to be believed, nor is the pain any less when it is invisible.

To be fair, the pain scale in this post was intended to help children identify their pain levels.