By now you’ve probably heard about studies linking migraine with a hole in one’s heart for some people. It was much ballyhooed in the media in the first six month of the year, but generally with little information to explain what it was, who might have it and how it was tied to migraine. I’ve been asked about this topic recently and realized that I’ve neglected it here. So I’m changing that. 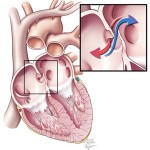 The hole, called a patent foramen ovale (or, more commonly, PFO), is an opening between the upper chambers of one’s heart. The hole is present in fetuses to allow blood to pass from one side to the other. (The graphic is from Cleveland Clinic’s PFO page, click on it to enlarge it.)

In most people, the gap closes at or after birth. For an estimated 25% of the US population, it doesn’t close completely and the PFO forms. This remaining tunnel functions as a valve. Normally the valve is shut, but sometimes remains open, sending blood that’s supposed to go to the lungs off to the brain and other parts of the body.

This isn’t an issue for most people with PFOs, but there’s always an exception. Some patients who had PFOs closed for a reason unrelated to migraine have reported that their migraines were gone or didn’t happen as often after the surgery. Thus spurring research into whether surgery to close PFOs is an effective treatment for migraineurs.

The evidence so far indicates that migraineurs who have auras may have more success with PFO closures than those without auras. Some articles I’ve read limit the population to people with auras, but others include all migraineurs.

The first migraine-specific study of PFO closure with a large population, called MIST, is underway in the UK. Results are expected to be announced next spring. There are two upcoming studies in the US. The one listed on NIH’s clinical trials site is called Paradigm II. Recruiting hasn’t begun, but eligibility details are available. Another, ESCAPE, has received conditional approval from the FDA.

The best site I’ve found for easy, straight-forward information is on MIST’s website. Although the study is no longer recruiting participants, the site explains the components of the problem and gives evidence supporting a connection between PFO and migraine. An overview of all this information is also available in PDF. An article in Science News has another terrific introduction.

Fellow blogger Teri Robert of Putting Our Heads Together has also blogged about PFO recently. Her take on it includes more detail than this one so make sure to check it out.

3 thoughts on “Closing Hole in Heart to Treat Migraine”