Of all the new treatment roller coasters I’ve been on, the Spring TMS brought the most emotional ups and downs. I anticipated its release for 10 years, which means I’d stored up a decade of expectation. Nothing but a complete cessation of my migraine attacks could have lived up to that much hype. Here’s how the trial went for me:

I still had constant head pain, but little fatigue and not much cognitive dysfunction. The reduction in fatigue and cognitive dysfunction brought enormous improvement to my quality of life. The pain was a 5 or 6, which is worse than my baseline pain level. It felt more like a headache than a migraine attack, though the pain was far more migraine-like than usual. It was centered around my left eye and temple (instead of an all-over throbbing pain). A couple ibuprofen took the edge off when the pain began to interfere with my ability to function.

The migraine pain from the previous week was lower, but still present. I was fully functional with little fatigue or cognitive dysfunction, so I had no complaints. I celebrated by emptying the shed and reorganizing the entire house.

I was still doing better than before I started using the Spring TMS, but my fatigue increased as the week wore on. Then I started getting slow-build migraine attacks (that’s my term, nothing technical, but I’m pretty sure the meaning is obvious). They seemed totally random, with no identifiable triggers. Then food that’s normally OK started being a trigger. Then the act of eating itself became a trigger (even with DAO). All the while, the fatigue kept increasing.

In this week, I noticed that I’d use the device and the migraine attack would let up, but return a few hours later. The length of this reprieve reduced steadily until I’d feel worse immediately upon using the Spring TMS. It’s like the device caused an instant rebound headache.

After spending two days laid up with moderate pain and major fatigue and cognitive dysfunction, I decided to stop the treatment.

After I stopped using the Spring TMS, the fatigue slowly decreased as the week progressed, though some cognitive dysfunction remained. I wasn’t worried. It took a week to get over the initial side effects, so I figured it would take a week to return to baseline. I still thought I’d be able to use the device again when things settled down.

When a migraine attack struck an hour before an appointment and wasn’t responding to triptans. I gave the Spring TMS a try. I felt worse instantly and spend the rest of the day in bed.

I was still spending more time laid up than before I started using the Spring TMS. I tried to keep the worry at bay, but the thoughts keep creeping up: “What if this is my new normal? What if I never go back to how well I was doing before I started the treatment?”

I kept reminding myself of an escapade with dizziness last February. My doctor said that a four-day migraine attack temporarily changed my brain, which made me more sensitive to the side effects of bupropion (Wellbutrin, a drug that has always made me dizzy unless I’m very careful with it). My brain didn’t normalize after that for two weeks. I used the Spring TMS for three weeks and my brain clearly reacted to it. I told myself that maybe it would take three weeks for my brain to settle down. Or three months. Either way, I told myself that there was no reason to think I’d feel this way forever.

It has been many months since I stopped using the Spring TMS. Eating and drinking anything but water continues to be a migraine trigger. My overall pain levels returned to baseline, but I spend more time at higher levels of pain than before I tried the device. My fatigue and cognitive dysfunction did not improve beyond the fifth week (though the ketogenic diet has improved my cognitive dysfunction.)

I suspect it’s a coincidence that I became more reactive to food (and eating) while using the device, though determining cause and effect is impossible. My doctor said he’s had patients become worse while using the device, but I’m the only one who has had a permanent change. A friend also tried it and got worse, but she returned to baseline within a week of stopping it.

Perhaps surprisingly, I would still encourage people to try the Spring TMS. Just be aware that your migraine attacks could worsen. Before you try it, talk with your doctor about that possibility and find out what they recommend—tough it out and hope the attacks will improve or stop altogether? Based on my discussion with my doctor, I would do the latter, but only you and your doctor can determine the right approach for you. 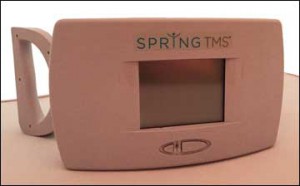 Energizing and encouraging are the words I’d use to describe the American Headache Society’s symposium last week/weekend. The opening remarks on Thursday morning actually made me cry. After the AHS president, Dr. Lawrence Newman, shared his heartfelt frustrations with migraine treatment and gave an impassioned plea for the 36 Million Migraine campaign, the room went dark. Dr. Newman then asked everyone to stand up with their cell phones lit to “shine a light on

migraine.” This picture from the AHS Twitter feed shows a small portion of the room in this powerful moment.

“These people care,” I thought so many times throughout the conference. I saw so many doctors, physician assistants, nurse practitioners, nurses and psychologists who are passionate and enthusiastic about headache medicine. They are frustrated about lack of funding and the stigma of headache and migraine, but they care deeply about and are dedicated to their patients. They are excited – ahem, cautiously optimistic – about the CGRP drugs that are in development for migraine as well as the neuromodulation treatments that are on the horizon (like transcranial magnetic stimulation and vagal nerve stimulation, both of which are noninvasive and should be available to patients soon).

This is the third year I’ve attended this particular conference and the fourth headache conference I’ve been to. The energy felt different. Maybe it was because I felt better and was able to engage more, but the enthusiasm and optimism seemed stronger than I’ve noticed before. Even more encouraging was the number of people new to headache medicine, mostly fellows in their early days of specialization, who attended the conference.

Yes, research for migraine and all headache disorders is underfunded. Yes, the arsenal of treatments is still nebulous and it’s hard to pin down what might help any individual patient. Yes, the stigma is still enormous. Yes, there is still a small portion of patients for whom it is difficult to find the right treatment. But the field is making progress and it’s being led by enthused and engaged providers who truly care for patients. The number of academic headache centers is on the rise, as is the number of fellows being trained in headache medicine each year.

I was already full of hope about the future of migraine treatment. This conference reinforced that my migraine and headache hope is well-placed. The tide is turning. It’s one of the many things I’m giving thanks for this week.

Want even more hope? Watch this interview with headache specialist and researcher Peter Goadsby. It’s well worth your eight minutes. (Many thanks to  Timothy for sending me this.)