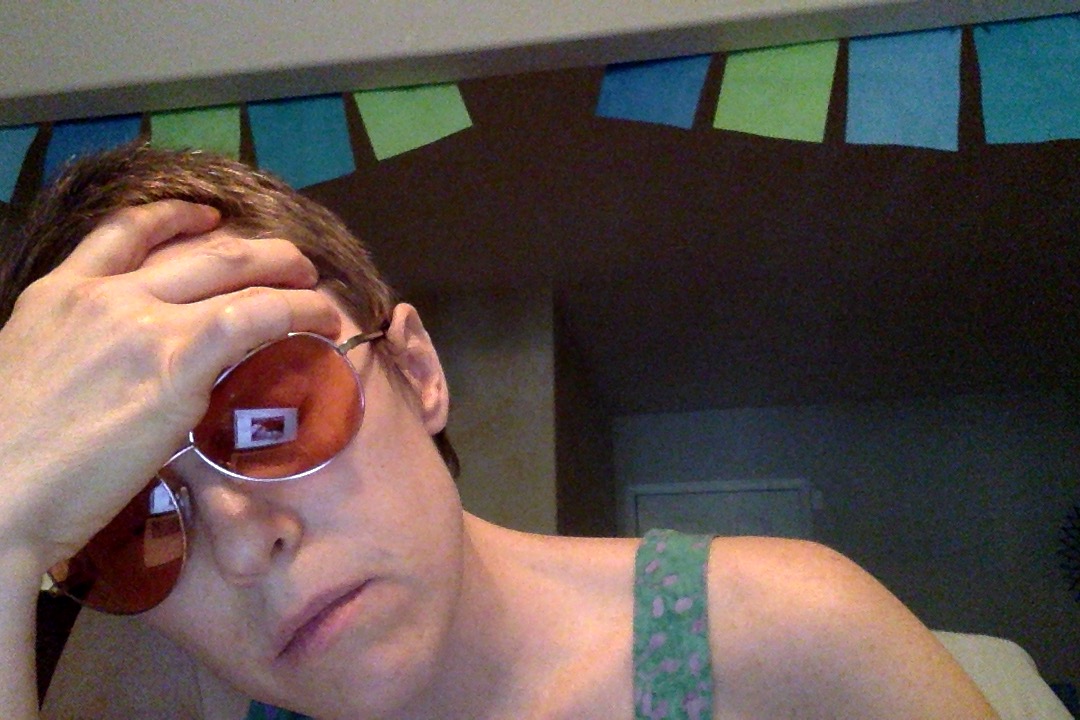 This photo is not a glamorous temporary facelift intended to show off my manicure, despite what Elle magazine might claim. Nope, it’s me trying to get at least a little work done during a migraine attack.

According to Elle, #migrainepose is a trending Instagram pose that’s “damn flattering.” I wish I’d know how beautiful I looked all these years that the pain-induced furrow between my eyebrows has been deepening into a rut.

We at ELLE.com love a weird Instagram pose, and the latest one populating on our feeds is giving everyone a headache. Well, it’s making everyone deliberately look like they have a headache. And it’s damn flattering.

Migraine Pose, coined by makeup artist Nam Vo, involves posing with one or two hands pulling your face up by your temples as if you had a, well, migraine. There’s a reason it’s trending: The pose tightens the face, makes your cheekbones look more prominent, and lifts the brows. It’s a temporary facelift for the ‘gram.

“I love it because the beauty of your hands frame the face and give it more structure. I always make my models pose this way,” Vo told me, “It’s also a great time to show off your manicure.” #Priorities.

My #priorities are reducing the stigma of this disabling disease that can rob people of any semblance of a normal life, teaching those without migraine how that migraine is so much more than “just a headache,” and trying to live as well as possible with a life that’s dictated by a terrible illness. Granted, showing off my beautiful hands and giving my face more structure are probably loftier goals. Perhaps I could have pursued those important priorities if I hadn’t spent most of my adult life disabled by migraine.

Ways to fight back against this blood-boiling migraine stigma:

A Sick Stigma: Why Are Cancer Patients Blamed for Their Illness? is yet another article about cancer with a message that rings true for headache disorders. It examines the ways in which healthy people blame patients for illness, why they do so, and how patients internalize these messages and beat themselves up. The following paragraphs particularly spoke to me:

“Judgments about behavior not only unsettle and stigmatize the patient, but reflect the interrogator’s own insecurities. Frequently, those disease detectives are attempting to regain a sense of control amid the inherently random and sometimes unjust world that we all reside in, according to researchers who have studied stigma.”

‘Secondly, you can say knowledge is power in a sense,’ Devins says. ‘If we feel like we understand something, it gives us the illusion of control.’”

These are similar to arguments I made in It’s Not About You on Migraine.com, with the bonus of being rooted in academic research, rather than personal experience. Illness — whether curable or chronic, life-threatening or not — scares people. Blaming the patient is a way to allay these fears and allows the currently healthy person to believe they have the power to avoid illness.

The stigma of migraine and society’s perception of illness, as well as the internal voice that judges me during a migraine attack have all been swirling around in my mind lately. The topics came together in Internalizing the Stigma of Migraine, which quickly became my most popular post on Migraine.com. I’m both saddened by the number of people who identify with this experience and honored that I can give voice to the torrent of emotions that accompany migraine.

Here’s a short excerpt from Internalizing the Stigma of Migraine:

I have to wonder if I and so many other migraineurs berate ourselves not only because other people regularly distrust that migraine is a true physical illness, but because we have internalized those same doubts.

This is where the stigma of migraine is especially damaging. Dealing with people who don’t understand — and don’t seem to want to understand — what we’re going through is frustrating and infuriating. Believing it ourselves is way more harmful because it demoralizes us and causes us to question the legitimacy of our own experience.

Who do I blame for my beliefs about myself because of migraine? No one. I can’t single anyone out because I can’t deny the cultural context in which my notions were formed. (Yes, I know that sounds like grad student speak. Stick with me anyway.)

Think about how few doctors understand migraine today and how much is still unknown about how migraine works in the brain and body. Now consider how paltry the knowledge was 25 years ago, when my “headaches” became chronic. Without one-sided pain or a visual aura, a pediatrician or internist would not consider migraine as the culprit.

There was no way to verify or quantify my ailments when I complained of symptoms like nausea (but rarely vomiting), ear pain (but rarely any sign of infection), and dizziness. Add to these factors that the symptoms typically came on without warning and also lifted suddenly, often leaving me feeling perfectly fine on weekends. If I didn’t know what I now know about migraine, I, too, would probably think a child was making up her illness.

Remember that 95% of the world’s population has a headache at some point. For most of these people, a headache is mild and easily remedied with an OTC painkiller or a little time. Headaches are dismissed as no big deal because they are not a big deal for the vast majority of people.

I no longer refer to the pain I feel with a migraine as a headache, but as head pain. This is a new realization, one I didn’t have even eight years ago when I named this blog. For a kid, pain that occurs in the head is thought of as a headache. I had no words to explain or even a way to conceptualize what was happening in the physical area of my head as something other than a headache.

Furthermore, society dismisses the significance of illness altogether. Cancer and other life-threatening illness are treated with reverence and fear, but their true impact is also minimized. People who push themselves beyond their physical limits and refuse to acknowledge the possibility of death are praised for their bravery. Acknowledging how physically devastating treatment can be, that the odds of survival are low, or fear of death is considered “negative thinking,” which is taken as a sign the person isn’t trying hard enough.

An illness that has no visible signs (to the untrained eye), no diagnostic tests to prove its presence, is not immediately life-threatening, and has “headache” as its primary feature has little hope for being taken seriously. Never mind that the World Health Organization determined that severe, continuous migraine as disabling as quadriplegia and that chronic migraine is responsible for more years lost to disability than every other neurological illness combined*. These and other facts and statistics are painfully slow in spreading to the public’s consciousness. As much as my advocate’s heart doesn’t want to believe this, an illness with as much baggage as migraine may never be recognized as the life-changing, debilitating scourge it can be.

I wrote Migraine Beliefs because I know I’m not alone in internalizing these cultural messages. The harsh, harrowing truths I acknowledge are the reality of living with a poorly understood and highly stigmatized illness. I can only play a small role in raising society’s consciousness about migraine, but sharing my truth helps connect all migraineurs. If my words can reduce even one person’s emotional pain, loneliness, and self-blame, I have succeed.

*My headache specialist just shared this fact with me. The WHO report with that information does not appear to be online yet, so I can’t link to the source.

In response to complaints about the women and shopping ad, Excedrin Migraine has replaced that “fact” on Migraine.com. The new ad says “70% to 80% of people who get migraines have a family history of the disorder.” Thanks for all your comments. Please stop by Excedrin Migraine’s Facebook and Twitter pages to thank them.