Daisy Griffin, a 14-year-old who has chronic migraine, raised $12,110 for migraine research by sailing alone across the Long Island Sound. She will donate 100% of the money raised to the Migraine Research Foundation.

Daisy has had severe 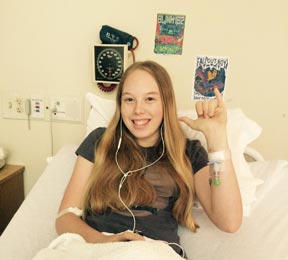 migraine attacks since she was four, which have progressed to chronic. Like so many of us, she has tried a slew of treatments, from medications to supplements to yoga to biofeedback. She’s had two in-patient hospital stays to treat migraine. Thanks to a couple preventive medications, she’s feeling better now, but still has a headache every day and migraine attacks at least a few days a week.

When I asked what she wished people understood about migraine, she said, “I really wish that people would get that I’m not just having a headache. I have a headache all the time and a few times a week it becomes a severe migraine. A lot of times people tell me how lucky I am that I miss school all the time. I actually feel lucky when I can make it to school, or even when I can get out of bed.”

Daisy has been sailing avidly since she was eight years old. It’s one of her great passions and she fears chronic migraine could force her to give up. Since she’s been feeling better, she sees this sailing trip across the sound as “sort of like me saying: Take that migraines! I can still do what I love!”

Daisy sailed an 18-foot spinnaker, the largest boat she’s ever sailed by herself. The sailing itself was much easier than she expected because the wind wasn’t very strong. But little wind also made for, in Daisy’s words, a “loooong” trip.

Having chronic migraine meant that Daisy’s trip could have be derailed by the ever-present threat of another attack. She was hopeful that even if she had a migraine attack, sailing would distract and relax her, as it usually does. To prepare, she made sure she got enough sleep and drank a lot of water before the trip. It worked! Daisy’s head hurt a bit, but she didn’t have a migraine attack. (Her father trailed at in a motorboat, so she could radio him for help if she had an attack. But she didn’t need to.)

In addition to the sailing trip, Daisy has raised awareness and donations through a booth at local fair (where she hosted a migraine trivia game) and a lemonade stand with her siblings and cousins. She wrote to groups and individuals to solicit donations and publicize her trip. A generous donor agreed to double the amount that she raised, which brought the total to $12,110.

You can still donate to Daisy’s campaign and the Migraine Research Foundation through CrowdRise.

I’ve never met Daisy, but I’m tearing up as I write about her accomplishments. Much of her young life has been dominated by migraine. Instead of trying to forget about migraine as soon as she felt better (as most of us would have done whether 14 or 57), she threw her newfound energy into raising awareness and funding for research. Her efforts took remarkable dedication and resourcefulness. It’s an impressive feat at any age.

Learn more about Daisy and her trip on her website, Sail for Migraine Research.