The neurologist I had such high hopes for lost all her shimmer in my follow-up appointment. The good news is I have no aneurysms, tumors or lesions and all my blood tests, except for one, came back fine. The bad news is the test results made me completely uninteresting to a neurologist who is primarily interested in autoimmune disorders.

Prolactin, Wikipedia and Google
The one concern in my blood test was an elevated level of prolactin, a pituitary hormone. The neurologist thought one of my medications could be the cause, so she turned to Google to check. Nothing came up until she came across the Wikipedia page that said Reglan could increase prolactin. I trust Wikipedia for Joanie Loves Chaci trivia, not for medical information.

She did look for further confirmation. Google turned up a six-page article on prolactin and the results included something on Reglan. After looking through all six pages, the neurologist didn’t see a mention of Reglan. She said, “I can’t find it, but Google says it’s in here, so Reglan is probably the cause.”

I actually agree, especially because I think the endocrinologist checked my prolactin levels in March. The neurologist and I also agreed that I should stop taking the drug and get another blood test in a month. She also mentioned that the endocrinologist should look for adrenal problems.

Lupus, Autoimmune Disorders and Fibromyalgia
Having hoped an autoimmune disorder was the reason I’m tired to the bone, I asked if fibromyalgia might be the cause. “Maybe, but we’re only looking at things we can do something about,” was her response.

Cyproheptadine
Cyproheptadine is an old antihistamine that has been used to treat migraine. The neurologist said she used it when she first started practicing 25 years ago, then quickly moved on to other meds. Now she’s come full circle and finds it pretty effective.

Great, but I’m not taking a drug without knowing anything else about it. I asked “What are the…” before she cut me off with “…the side effects for cyproheptadine? Nothing. You may have a dry mouth in the morning, but that’s it.” I know better than to believe a drug has only one side effect.

Researching the drug when I got home, and not relying on Wikipedia or Google search results for an answer, I discovered dry mouth is one of the biggest side effects. So are headaches and dizziness, my two main symptoms.

Sinus Blockage
My left front sinus cavity has three pockets of fluid. It isn’t floating around, but walled off in lumps. I forgot to ask about treatment for that; she forgot to mention it. I guess an ENT is next?

Dismissal
I could feel her interest in me waning as the appointment went on. I became another migraine patient — one who is hard-to-treat at that. She’s willing to try the two best drugs in her arsenal (Topamax if cyproheptadine doesn’t work). She would probably continue to treat me if those drugs don’t work. I just don’t think she has any interest in doing so.

I’ve been fortunate with doctors. Other than one poorly regarded headache specialist, I have never felt this dismissed. It is like I started dating someone I thought would be a great match and was dumped with no explanation.

What’s Next
I’m discouraged. I hoped the lupus test would be positive. Not that I want to have lupus, but having a place to start would be nice.

I see the endocrinologist in June and will wait until that appointment before taking cyproheptadine. The drug might work and I want to try it. Just not at the expense of already questionable lab results. Then it is time to go through the list of -ologists I haven’t seen and make some appointments. I’ll also add an ENT to my list of doctors to check my sinuses.

I increased my magnesium to 200 mg last night. That is the only thing I’ve noticed a difference with, so I’m going to run with it. As long as I don’t get nauseated, I’m happy to push the dose. Still, I’m tired of treating myself.

I will probably go to an inpatient headache clinic this fall. Chronic daily headache patients often have excellent results at first, then return to the same levels of pain a few months later. A few months would be better than none at all.

I’ll get through this. I’ll look for more possibilities. I even believe I may find something soon. That doesn’t prevent the disappointment. 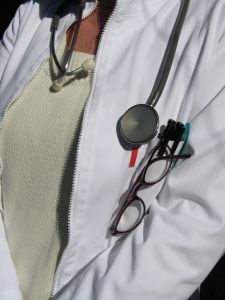 Having focused so long on my headaches without finding a successful treatment, I decided to visit a general neurologist and start from scratch. I brainstormed everything in my body that could possibly be a symptom, even ones I’ve had so long that they seem normal. I also took a list of all the medications and treatments I’ve tried for migraine and chronic daily headache.

I liked the neurologist off the bat. She went over my list symptom by symptom, asking lots of questions and making many notes. A comprehensive neurological exam, with toothpicks pokes, followed. We closed the 75-minute appointment going over the possibilities and planning follow-up steps.

I had blood drawn to test for adrenal problems and lupus or related disorders. Since I haven’t had an MRI since 2002, I had one yesterday. I also had an MRA, which lights up the blood vessels, to check for aneurysms. This afternoon I’m meeting with the neurologist to go over the results.

No one has mentioned adrenal or autoimmune disorders (like lupus) to me before. I’m intrigued. I could probably find symptoms to coincide with any disease, but my do mesh well with autoimmune illnesses. If the test for lupus is positive, I may have lupus. Or I may have one of a long list of other autoimmune disorders (also referred to as collagen vascular disorders). A positive lupus test will mean another level of testing.

I’ll let you know what I learn at my appointment. I really feel like we’re getting somewhere, but I’m trying to not set my expectations too high.

“Comorbid” is a word I’m seeing more and more in discussions of migraine. I don’t know if it’s appearing in more patient-centered articles than it once did or if I see it more because I read so much more about migraine than I once did. In any case, it’s something everyone with headache should know about.

Here’s the definition: Comorbidities are disorders that have a greater-than-coincidental association with another disease. According to WebMD, disorders that are thought to be comorbid with migraine including stroke, epilepsy, lupus, Raynaud syndrome, multiple sclerosis, essential tremor, bipolar disease, depression, anxiety disorder, panic disorder and social phobia. Meniere’s disease and certain gastrointestinal disorders are also sometimes mentioned.

It’s like being in high school. Maggie, Ann and Peter are best friends and don’t go anywhere without each other. Ann starts dating Steve and he becomes the fourth member of the group. Does Ann cause Steve to be part of the group? Could he have joined them if he was Maggie’s lab partner and she knew her other friends would like him? What if they all sit next to each other in a class and Steve just naturally joins the group? Does it matter which came first or why?

There aren’t many web resources that catalog and describe comorbidities. The best I’ve found is Headache Disorders: Common Coexisting Conditions. If you want to know if a specific disease is comorbid with migraine, the best online option is to Google both terms together or use both terms and comorbid or coexist.