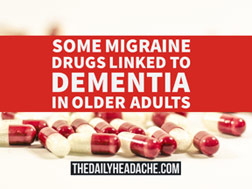 2 thoughts on “Some Migraine Drugs Linked to Cognitive Impairment, Dementia in Older Adults”