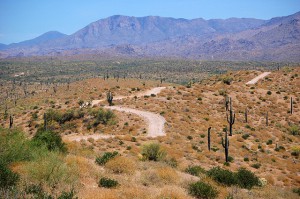 When I was in Seattle last summer, I wrote about my grief that migraine kept me from living in the city that felt like home to me. A few months later, when friends were visiting for Thanksgiving, I was hit with the realization that Phoenix had become my home. I continue to be surprised by just how much I like living here now.

Returning to Phoenix wasn’t in my plan until I made the connection between weather and the severity of my migraine attacks.* I only agreed to come back after Hart and I decided I would try to spend summers in Seattle. That’s not just because summer is hot and stormy in Phoenix, but because I felt like I needed that time in Seattle. Not anymore.

I often describe my relationship with Seattle as troubled romance. Despite how much I love her, we’re not compatible. In fact, with her cloudy skies and rain, Seattle can be downright cruel to someone with weather-triggered migraines. I’m pretty sure I loved her more than she loved me. We broke up years ago, but I always thought we’d get back together. I’ve officially moved on. (Though I wouldn’t be opposed to summer flings.)

I’m no longer angry that migraine forced me to give up my favorite city; I’m thrilled that it has led me to discover Phoenix anew. I don’t wish I lived anywhere else, though I’m still eager to travel and explore the world. I miss my friends elsewhere, but adore my loved ones here. Pine trees and lakes, which I definitely still need, are only a couple hours away (and Ponderosa bark smells like vanilla).

My emotional “home” in Seattle was on the sofa in front of the fireplace. I don’t have a special place like that in Phoenix. That bothered me until I realized I don’t need one. My entire house is my center, the whole city is my home. I no longer think “I want to go home” during a bad migraine; I’m already here.

*Moving didn’t reduce my migraines as much as I’d hoped when I first returned. See Relocating to Reduce Weather Triggers, on Migraine.com, for the full update.

13 thoughts on “I Relocated for Migraine & Found My Home”