When I first connected with other migraineurs on a forum in 2004, I was horrified to learn that reading exacerbated migraine attacks for many people. I was so grateful it wasn’t a problem for me and often thought how horrible such a restriction would be. I couldn’t imagine how I’d get through a migraine when I typically read a book a day when bedridden. It never occurred to me that I one day might have trouble reading.

Skip to late 2007, after years of the migraine attacks steadily worsening in severity. I gave up reading because it was just too physically painful and hoped doing so would improve the migraines. Instead, they continued to worsen until I also had to give up being on the computer and, thus, blogging. Before then I’d never considered that I might have to give up reading; suddenly I was pretty sure I’d never read again. (I enjoyed a brief period of reading using Hart’s Kindle with the font in the largest size, but that only lasted a few books before it began exacerbating the migraines again.)

I’m thrilled to share that I’ve been reading novels again since March! Having the severity of my migraines reduced with magnesium and wearing TheraSpecs while reading the Kindle, I’m able to read with no problem. Migraine attacks have become much easier to bear and I’m so thankful that I can distract myself from the particularly painful ones with a book.

Until now, chronic migraine had felt progressive: the attacks worsened in severity and duration and the debility increased as time went on. The losses mounted. To regain the ability to read is to regain some of the hope that fell away as my health worsened. I have migraine; migraine does not have me.

Migraine Awareness Month #1: Your First for the First

National Migraine Awareness Month Blog Challenge, Day 1: Share the story of your first Migraine, what it was like, if you knew what it was, what you did, how you felt.

Though I’ve had headaches all my life, they weren’t diagnosed as migraine until 2002 and it took me a few years to believe that headaches that weren’t one-sided, didn’t have a visual aura, and didn’t make me throw up were actually migraine. I don’t remember my first migraine — either it happened before I’m able to remember or it blends in with all the rest of the headaches — but I do remember the first migraine that was obviously triggered by an odor.

My fifth grade teacher left the door to the workroom open one afternoon and the smell or rose-scented potpourri wafted into the classroom. That smell is so vivid that even now, as I remember how much my head hurt and how nauseated I was, I’m convinced artificial rose scent is wafting in the air around me. I can clearly picture the classroom and where I was sitting. I went to the nurse, who let me lie down for a bit, then sent me back to class. To her it was, after all, “just a headache.”

I wish I could tell her it was one of many debilitating migraine attacks that I’ve had in my lifetime with this chronic neurological disorder. I sometimes wonder if I would be so disabled today if anyone had a clue about my “headaches” when I was young. While I don’t dwell on this — its not like migraine treatment 25 years ago was particularly effective — I beg parents, teachers, school nurses and doctors to take a child’s complaint of headache seriously. Anyone who spends time with children should know that “migraine” is not synonymous with “bad headache,” that headaches aren’t just an excuse not to go to class, and that painkillers don’t always do the trick.

I’d like you to think I’ve been absent from the blog because I’ve felt so great that I’ve been living it up. Actually, I’ve continued to feel pretty crappy since right before Christmas. There’s always an excuse. In early January was the stomach bug that caused horrendous nausea every time I ate, then triggered an equally bad migraine. Right after I recovered from that, my mom dislocated her shoulder and broke her humerus. Then Hart and I moved into the house…. You get the point. Unfortunately, the migraines continued even after the stress settled. Until Hart and I made a brilliant connection — our AC/heating ducts are making my migraines worse.

We turned off the heat when our roof was patched last week to make sure no chemicals or odors entered the house. I had a good day after the first night with it off, though I need to see a pattern before I jump to conclusions. I forgot to turn the heat back on and the good days began piling up. I’d get pretty tired for a couple hours every afternoon, perhaps because I was doing so much, but few migraines followed (and they were mild if they did). The night we ran the heat, I had a migraine in the night and was headachey and blechy the next day. We turned the heat off again for the next night and voila, I awoke feeling better!

As always, “feeling better” doesn’t mean migraine-free, nor does it mean I’m operating with full energy. Still, I don’t spend much extra time in bed, afternoon naps generally abort oncoming migraines, and the migraines I do have are relatively mild. This all adds up to going out for fun excursions and errands, settling into my new house, and cooking up a storm.

This discovery coincided with getting the results of an energy audit. Not surprisingly, our 1945 house has many gaps in the ducts and the attic has lots of dust and broken-down insulation. The heat runs and pulls all that yuck into the air. Because I’m so sensitive to environmental triggers, Hart and I already budgeted to seal the ducts and use chemical-free products on any household improvements. Soon we will seal the ducts with formaldehyde-, PVC- and VOC-free products, then have them cleaned. I hope, hope, hope that does the trick. I can go without heat, but a Phoenix summer is impossible without air conditioning.

Dirty ducts are a fuzzy sort of trigger. Is whatever is in the air the trigger or does it stir up allergies, which then trigger the migraines? The latter is most logical, but why don’t I have allergy symptoms? As always, I have many more questions than answers. What I’m sure of is that I haven’t had a raging migraine in 10 days. That’s enough of an answer for now.

Of the 33 allergens tested for in a basic allergy panel, I’m allergic to nothing. I’m happy with the results, even though it means crossing yet another possibility off the list. I used to get discouraged when I hit a dead end. I’m not now; just glad to not have to deal with allergy shots.

The allergist thinks I’m one of about 20% of people who have nonallergic rhinitis. These folks aren’t bothered by typical allergenic inhalants, but by a host of other possibilities, including odors, irritants in the air, weather changes, medications… Mayo Clinic’s definition of rhinitis:

If you do have rhinitis, the lining of your nose swells due to expanding blood vessels. The mucus glands in your nose get stimulated, causing a congested, drippy nose. The symptoms of nonallergic rhinitis are similar to those of hay fever (allergic rhinitis), but there’s no allergic reaction involved.

The treatment is a simple spray of intranasal corticosteroids, like Flonase. Great news, right? Except that a study written up in this month’s issue of the journal Cephalalgia indicates nasal steriod sprays can trigger migraines! I’m going to try it, but nasal irrigation (with a neti pot) might be a better solution. You may have heard of nasal irrigation about a year ago, when Oprah praised its benefits.

Using a neti pot is simple. Basically, you pour a saline solution up one nostril and it comes out the other. I won’t lie — it feels bad and weird at first. It takes patience to put up with the initial unpleasantness. Once you get the hang of it, nasal irrigation actually becomes pleasurable! Here’s how it works:

I’ve never used a neti pot consistently, but am always pleasantly surprised by how my sinuses feel afterward. It’s an easy, inexpensive treatment to try. Neti pots, some of which come with salt packets, are $10-20 on Amazon. Making your own saline solution is simple and much less expensive. The basic recipe is 1/4 teaspoon non-iodized salt to 1 cup warm water. (Distilled or purified water is preferred. To use tap water, bring it to a boil, then let it cool before using it.) You can choose to add extra ingredients. A 1/4 teaspoon baking soda makes the solution more soothing. You can keep your nose from drying out by adding 1/4 teaspoon glycerin.

I’m dedicated to giving nasal irrigation another shot. I’ll do it every day for a week, starting today. If you’re interested, you can track my progress on Twitter. How about you? Does it sound like a good treatment or does it just gross you out?

Check out neti pots on Amazon and help support The Daily Headache!

The Pleasures of Reading a Book 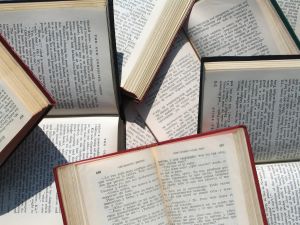 I held a printed copy of a book and read the entire thing. Although I triggered a migraine every time I read, reading felt so good. Was it worth it, especially considering most books I want to read are available as audiobooks?

I used to believe audiobooks were a good replacement. Then I tried to listen to them regularly and  discovered how inadequate they are. Reading a book captures me in a way listening can’t. I don’t get distracted by every little thing. I don’t have to get up and pause for interruptions, nor do I have to rewind to find what I missed. I don’t get bored.

Most importantly, I get absorbed reading a book. I imagine the characters, identify with them and let my imagination go. I just don’t do that with audiobooks. Listening doesn’t engage me in the same way. Turns out getting absorbed is a primary reason I love to read.

After the great pleasure of reading that book, I’ve returned to listening. Turns out holding and reading a book isn’t worth the pain. This makes me so sad. How will I ever write a novel if I can’t read books (or look at the computer!)?