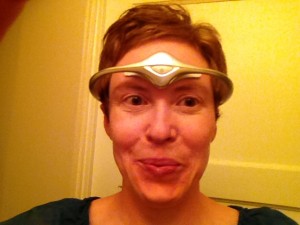 (i can’t believe I’m posting a selfie with a Cefaly.)

The FDA has approved the Cefaly for migraine prevention in the U.S., according to an announcement from the agency yesterday. You can order one now at Cefaly.us. The device itself is $295 and a pack of three electrodes costs $25. You must send them your prescription before they will ship your order. I don’t know what this means for eventual insurance coverage.

Here’s an excerpt from the FDA’s press release that describes the studies the approval was based on:

The agency evaluated the safety and effectiveness of the device based on data from a clinical study conducted in Belgium involving 67 individuals who experienced more than two migraine headache attacks a month and who had not taken any medications to prevent migraines for three months prior to using Cefaly, as well as a patient satisfaction study of 2,313 Cefaly users in France and Belgium.

The 67-person study showed that those who used Cefaly experienced significantly fewer days with migraines per month and used less migraine attack medication than those who used a placebo device. The device did not completely prevent migraines and did not reduce the intensity of migraines that did occur.

The patient satisfaction study showed that a little more than 53 percent of patients were satisfied with Cefaly treatment and willing to buy the device for continued use. The most commonly reported complaints were dislike of the feeling and not wanting to continue using the device, sleepiness during the treatment session, and headache after the treatment session.

Neither of these studies are new and still have the limitation of being short-term, but I’ll reiterate that it’s worth trying out. Even more so now that you won’t have the additional expense of ordering it from Canada and your insurance may pay for it. I’ll keep you posted on it’s availability.

Here’s my experience with it, including a detailed description of what it feels like: