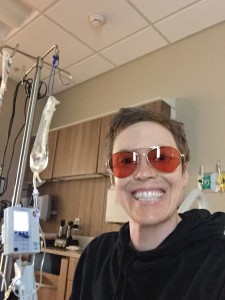 Day 2 of the migraine IV cocktail was much smoother than the first. The nurse used an ultrasound to place the IV needle. It went in quickly and almost painlessly. We did the Benadryl first so I’d be sleepier by the time the DHE hit. That didn’t happen, but the DHE only caused slight nausea, so it didn’t matter. The DHE itself made me a little sleepy so I napped a bit. Overall, I had few side effects. I’m a bit groggy an hour after finishing the treatment and I don’t feel as bright as I do after using a triptan to stop an attack. Still, my pain is about a 1.5, so I’m not complaining.

Without the nausea to hold me back, I did the extra doses of DHE, for a total of four doses. I don’t feel any better (or worse) after the fourth than I did after the second, but I’m going for long-term improvement rather than immediate relief. (Recap: after a new treatment I tried in March made me feel worse, I could function if I took naratriptan (Amerge) and Midrin every time I ate. It worked fairly well, but meant I could only eat two meals a day and had no treatments for breakthrough migraines. And I still lost at least a couple hours to migraine each day and was still limited to 40 foods—those that were triggers before became even worse triggers and were unresponsive to drugs.) The infusion protocol I’m doing now is sometimes used to break migraine cycles or get people to revert from chronic to episodic migraine. I’m just trying to get back to where I could eat my 40 foods without triggering a migraine and don’t have to take naratriptan and Midrin twice a day every day. There’s a part of me that’s hoping the IV treatment will enable me to expand my diet even more, but I’m not holding my breath.

The irony is that when I tried the new treatment in March, my goal was to expand my diet beyond 40 foods. Now, if I can get back to having 40 foods that don’t trigger attacks, I’ll be thrilled. Also, two months of naratriptan and Midrin twice a day has made me less afraid of taking them when I choose to eat off the diet.

I fear I’m rambling. One more thing. This debacle has shown me that my food sensitivities are neurological in nature, which actually gives me a lot of hope.

Thanks again for the good wishes. I’ve loved reading all your comments here and on Twitter and Facebook.

The pain is still at a 2 today. It increased to 3 in the night, but that’s normal, since my pain is almost always worse when I’m lying down.

Significant tinnitus kept me awake last night. I always have tinnitus, but my brain can usually edit out the sound, even with earplugs in. Not last night. It seems to be less today, but it’s hard to tell since I’m not trying to sleep. Tinnitus is not a side effect of any of the drugs I’m getting, but I have a call into my doctor to see if it could be connected.