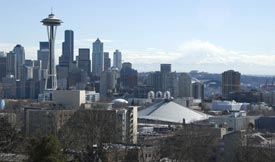 Yummy food, Rock Band, neighborhood walks, warm weather. Mild chronic daily headache levels and nothing more than moderate migraine symptoms. That’s what the last four days have been like for me. I’ve been so happy.

Is the convergence a coincidence? The good mood and beautiful weather certainly go together; the mild pain and weather do, too. On the big question, if mild pain and great weather are related, I have no answer.

Most people with migraine — I don’t know about other headache disorders — will tell you that weather is definitely a trigger. Researchers and headache specialists agree. Unfortunately, data are sparse and self-reports of headache pain and weather connections are inherently flawed. According to a Mayo Clinic neurologist,

Several studies suggest that weather changes trigger migraine headaches in some individuals. Study results indicate that some people who have migraines appear to be more sensitive to weather changes, such as changes in weather patterns, temperature, absolute humidity and barometric pressure. The mechanism by which these factors may trigger migraines in these individuals isn’t known.

There’s no clear evidence of a link between weather changes and other types of headaches.

Changes in weather patterns, temperature, absolute humidity and barometric pressure are potential triggers. Anyone with migraine is prone to a migraine episode from any change in weather? A little vague, isn’t it.

This is no different than saying I’m more likely to trip on a curb when the sun is shining than when it isn’t. Finding a reason should be easy. Some possibilities: I spend more time on sidewalks when the weather is nice. I’m looking around and not paying attention. Or the shoes I wear when it isn’t raining don’t fit as well as my winter shoes. Or the sun is so bright I can’t see the step. Or there are so many people in the crosswalk I can’t see where I’m going. Or the coffee I had made me shaky.

You get the point. Isolating variables in everyday life is impossible. Maybe two or three parts of my tripping scenario are to blame. Could be just one or something altogether different. I could trip on a Tuesday and again on Saturday. Unlikely that they will have the same cause.

I cannot change the weather and I haven’t had any luck in tracking its relation to my head. Even if I could know when the weather would trigger a migraine, I don’t know if I’d want to. I don’t care if I can predict a migraine two days in advance. I can’t change it and I’ll spend the interim anxious it will hit any moment.

Have you found a strong correlation between weather and your migraines or headaches? Is it useful information to have? Answer on the online support group and forum or leave a comment below.